Please – this is an EASY job! We do them in well under 10 minutes (yes, we have done a bunch, but they actually take us less than 5 minutes). It will take you longer than that to read this page, read the instructions, and download and view the MPEG movie!
The vast majority of the “problem” calls we receive are because ALL of the old lower bushing AND wave/spring washer(s) were not removed!! — please be SURE and do that before you call us.

Start by removing the shift knob.

81-88’s also have a chrome nut below the knob that needs to be removed.

The panel is removed by just pulling up on the backside, or sides, as shown.

After the panel is pulled off, pull off the two round sealing boots by pulling them up over the shift lever.

This is about what you will be looking at. On the 93-95, it is easiest if you remove the lower boot panel (as shown unbolted on the right) at this time.

The 86-92 car we used for this shoot has had the bottom part of the middle boot cut away a lot – this is OK, but we don’t cut them. 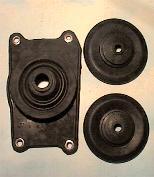 If you are lucky enough to have an uncut boot, just push the rubber down around the tower, as shown in the picture, so you can get to the three bolts.(Does not apply to 93-95’s)

Remove the 3 bolts (10mm socket) that hold the round plate to the shift tower.

(1.2meg, 27 seconds)This is a good time to watch the MPG movie we made of the installation. The steps are shown in the stills below, but it shows the actual time required of about 30 SECONDS.
To view, click anywhere here

81-83 Transmissions do not have this lower nylon bushing – the radius for the shifter ball is machined into the tower.Fish out whatever is left of the shims and bushings — we have found remnants of many bushings down there!
NOTE: Not removing the old bushing results in MOST of the problem calls we receive!!

This is what it should look like AFTER old bushing AND spring have been removed.

After cleaning the shifter hole, this is a good time to put the oil in the shift tower. We use 90W trans/diff oil. Fill to ABOVE the shift rod you can see down in the tower.

81-83’s use a thinner spacerDrop the inner spacer into the tower aligning the groove in it with the pin in the tower.

Put the white bushing (with spring snapped onto the lower side) into the tower on top of the spacer that was installed in the above step. Set it so the notch (which is up) aligns in the same direction as the pin in the tower.

Put some oil around the bushings and the ball socket and groove.
Put the lever back into the hole, being SURE the grooves in both bushings are lined up with the locator pin.
Then bolt the plate back down with the new 3 bolts supplied with the short shifter.

The middle boots slip down over the lever, and are pulled onto/around the lower boot. They are two sizes, so be sure to put the slightly smaller one on first.

Put the top panel, and knob back on, and you are done.